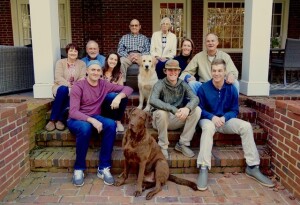 Kenneth Charles Kennedy, 84, passed away on November 21, 2022. Ken was born in Macon, GA to Charles Alton Kennedy and Marjorie Green Kennedy on July 28, 1938. Upon graduation from Lanier High School, Ken joined the United States Navy on his 18th birthday and served aboard the USS Lofberg.  In June 1961, Ken married the love of his life, Jean Yawn, and they began their sixty-one year journey together.  They had two children, Jena Lynn and Joel Lane, and lived in Macon most of their lives.

Ken spent most of his career at Georgia Power Company, retiring at age 55.  After a bit of “time off” in retirement, Ken discovered his “second career” as an instructor at GA Transmission in Smarr, Georgia. He loved teaching and sharing his years of experience, and it brought him joy for many years.

Anyone who knew Ken knew what was important to him:  his faith, his family, and his friends.  Ken and Jean were long-time members of Gilead Baptist Church, where they faithfully served God. Ken’s faith was deep. Each morning, you’d find him at the kitchen table, pouring over his Bible, and he was someone whose prayers were coveted by many. He wanted everyone he met to know Christ and his life was a testimony to his salvation.  Ken loved his family dearly—his wife, children, grandchildren, and great-grandchildren—and there was always a twinkle in his eye and a jar of Peanut M&Ms waiting at his house, presumably to make you feel better after he beat you in a game of pool.  He loved a good crossword puzzle, Braves baseball, Fresh Air barbecue, and making to-do lists. Under his sometimes-serious exterior, there was a softie who hid sweet notes for his wife or would unexpectedly show up with a pot of chili for co-workers, church friends, or the people who helped take care of his lawn.

The memorial service will be Monday, November 28 at 2:00 p.m. at Harts Mortuary, 6324 Peake Road, Macon, GA and will be officiated by Pastor J. Craig Holmes. In lieu of flowers, memorial gifts may be made to Gilead Baptist Church, 4800 Ivey Drive, Macon, GA 31206.

Hart's at the Cupola, Hart's Mortuary and Cremation Center, 6324 Peake Road, Macon, Georgia 31210 has charge of the arrangements.

To send flowers to the family or plant a tree in memory of Kenneth Charles Kennedy, please visit our floral store.